Women in Advertising: A Look Back at the Trailblazers This week marks the 100th anniversary of women’s suffrage in the U.S. And though it’s been quite the century, there’s still a long road ahead of us before we can celebrate true gender equality. In our industry, women have created incredibly powerful campaigns and introduced groundbreaking strategies that have shaped the way we understand and relate to brands. But for far too long, their impact has been overlooked and underappreciated. By learning from female leaders of the past, we can plan for a better, more equitable future. Let’s take a look at some of their stories.

Mathilde came to America from Germany in the early 1870s. After her husband’s death, she began working as a translator and was fluent in German, English, Spanish, and French. She also worked hard as a newspaper and magazine writer, but discovered she could earn more by purchasing and selling ad space.That’s when she founded her own marketing agency.

The majority of Mathilde’s business came from her medical accounts, which were exceedingly profitable. A variety of other accounts were handled by her female partners, Mary Compton and Meta Volkman, and together they ran a solely female agency. Mathilde ran her agency so successfully that she was able to continue her passion for the remainder of her life. As an immigrant, and as a woman, Mathilde stands as an icon for a more diverse and inclusive workforce. Her legacy as a groundbreaking writer, entrepreneur, and business owner can serve as an inspiration for a new generation of marketing leaders – because no matter how high the odds are stacked, there’s always a chance to shine.

The Protest That Became a Platform

Let’s leap forward about 90 years or so. It’s 1969 and ad exec Barbara Gardener Proctor is assigned to launch a concept that parodied the current social justice marches to sell hair care products. But as a proud black woman at the height of the Civil Rights Movement, doing so would go against everything she stood for. She protested the racist ad and was subsequently fired. Not to be silenced, she established the Proctor & Gardener agency on her own within a year, using her maiden name to allude to a male partner to ease the minds of potentially chauvinistic clients.

Her firm was massively successful. She was profiled in 60 Minutes and featured in Ronald Reagan’s State of the Union Address in 1984. Through it all, her multimillion-dollar firm remained committed to its founding ideals, vowing never to create ads for products that could hurt women and people of color – most notably, cigarettes. In addition to breaking barriers, Barbara stood up for her beliefs, despite the consequences, becoming an example of the power of perseverance and strong ethics. Her story can serve as a magnetic north for our moral compasses and remind us all to stay true to our principles.

Continuing the Fight for Equality 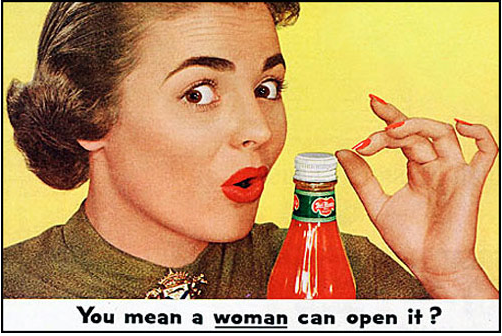 It seems like advertising has always been plagued by the sexism of its time. Just look at some of the ads from the 40s and 50s – like this 1953 Alcoa Aluminum ad, for example. “You mean a woman can open it?” Yikes. In fact, up until very recently, it was hard to find an ad that didn’t stereotype women as either sexual objects or doting, clueless mothers.

That’s why in 2018, over 170 women executives in the ad industry started Time’s Up Advertising. This group seeks to shift how society portrays powerful women and addresses the harassment and discrimination that harms workplaces and stifles creative exploration. They are also working to rebuild the culture of advertising from the inside out and create ads that reflect eq

uity and diversity. With more women in higher positions, fewer negative ads will be produced. When young people see the impact of positive organizations like these, it opens up possibilities they never thought existed. How many students today will launch successful ad careers and change the industry? And it’s all thanks to the courage and dedication of agencies like Time’s Up Advertising.

The course of progress never runs smooth, and our journey to gender equality is only just beginning. It has taken the tireless efforts of generations of women to fight for their rights, demand change, and pave the way for their daughters. The fight continues, but by drawing lessons from the trailblazers of the past, we can move forward together.