The Best Marketing Campaigns of 2016 (So Far) There have been a lot of changes in the marketing industry these past six months. New devices, apps, ad blockers, and more have shifted consumer expectations and pushed marketers to think more creatively than ever in order to get results.

Navigating these new norms can be challenging, but the payoff is oh so sweet when a brand does it right. Take a look at some of best marketing campaigns from the first half of 2016, and what led to their success.

In February, Disney invited fans around the world to share their Mickey Mouse ears on social media with the hashtag #ShareYourEars. For every photo that was shared, Disney would donate $5 to Make-A-Wish, with a cap of up to a million dollars.


Celebrities like Neil Patrick Harris, Tori Kelly, Pentatonix, and many others helped spread the hashtag by sharing their own #ShareYourEars photos with their followers.

Why it worked: Social media campaigns asking individuals to share branded content can fall flat. Disney had an important insight, though: many fans already share Disney-related posts on their own, so asking them to use a hashtag was a seamless next step. In the end, Disney celebrated the campaign’s huge participation by doubling its donation to Make-A-Wish to two million dollars.

In early February, a mysterious door appeared on a New York City street, with only an Oreo and the words “Open Here” to provide any clues. Passersby could walk up, open the vault, and receive a personal pack of filled-cupcake Oreos from a Wonka-like conveyer belt, six weeks before the new flavor hit stores. 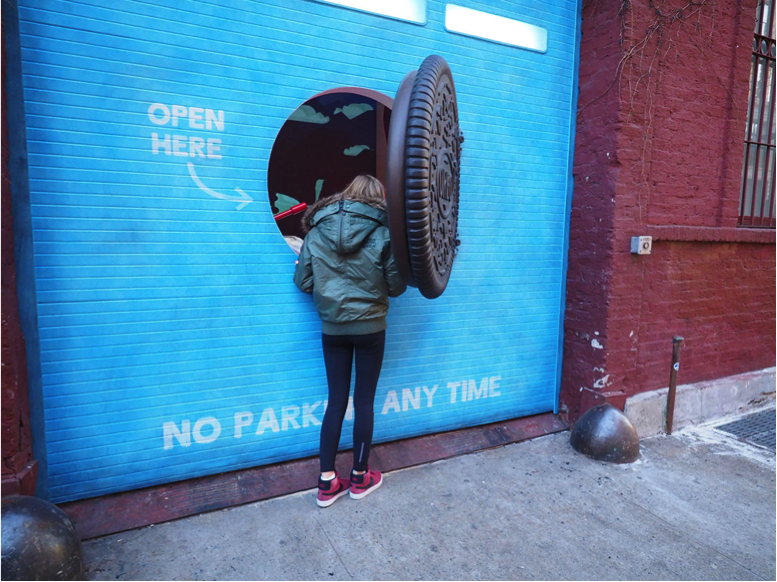 The pop-up was part of Oreo’s Wonder Vault campaign, and actually resurfaced in LA earlier this month (this time featuring chocolate-chip Oreos) with a Twitter moment and Snapchat geofilter to amplify its reach.

Why it worked: The mystery surrounding the installation fit seamlessly with Oreo’s playful personality, and lent itself to being shared across social (I first heard about the vault from a friend’s Instagram post about going to see it during her lunch break). Plus, as more Oreo flavors are created, the overall Wonder Vault campaign will stay evergreen.

Water is Life, a nonprofit that provides clean water resources, faced the challenge of trying to reach millennials through a social media campaign without much budget to support it.

Enter, Venmo: a peer-to-peer app used to quickly send/receive money. Though the app is largely popular with millennials, it doesn’t allow ads. So Water is Life found a loophole: sending personalized ads disguised as small in-app payments to gain users attention. Check out the video to see how the campaign worked:


Why it worked: Water is Life only spent $2.50 to send two hundred and fifty personalized payments asking users to donate. The result was a $400 spike in donations, showing that an innovative approach on an unexpected platform can pay off in a big way.

To remind children (and the world) that the next generation of astronauts, engineers, and inventors is sitting in school desks right now, Lockheed Martin took a group of students on a field trip like no other.


The Field Trip to Mars took students across 200 miles of Mars’ landscape (which was actually the streets of Washington, D.C.) in the first ever “group VR experience.” Unlike the isolated experience of a VR headset, the bus’s incredible technology made it possible for all of the children to engage with the view and one another during the experience.

Why it worked: Virtual reality has had a lot of buzz lately, but many companies are still figuring out how to take it beyond novelty. Lockheed Martin’s success came from finding a new way to use VR that still felt authentic and purposeful. Fun fact: This campaign was the single most awarded piece of work at Cannes this year with 19 Lions across 11 categories.

We’re looking forward to seeing even more innovative marketing campaigns in the second half of 2016. In the meantime, let us know about campaigns that have caught your eye this year at @QuattroPhilly!